Click chemistry (or one-touch chemistry following the football metaphor) occupies a prominent place in the arsenal of chemical reactions that, due to its efficiency and effectiveness, approaches the concept of ideal chemical transformations. This fact has been recognized with the 2022 Nobel Prize award in Chemistry.

The hydroxyl-yne reaction (addition reaction of alcohols to activated alkynes catalyzed by Lewis bases), developed over the years by different research groups, has been recently formalized by the group of David Tejedor and Fernando García Tellado as an extremely efficient reaction with regard to yield and atom economy, and general for all types of alcohols, with the sole exception of saturated aliphatic tertiary alcohols. These characteristics define it as a click reaction with a broad spectrum and enormous potential for further transformations. Their counterparts amino-yne and thiol-yne have demonstrated this transformation power in different fields of organic synthesis. One of them, extremely relevant in current synthetic chemistry, is dynamic covalent chemistry (CDvC). This chemistry makes use of reversible reactions to exercise control in the generation of molecular systems and networks, or complex chemical architectures. The reversibility of these reactions allows the development of molecular editing processes in covalent assemblies by exchanging some of their components.

Despite the increasing number of reactions that are being included in the arsenal of CDvC reactions, the number of click reactions available is still very limited. In a recently published article in Organic Letters, research groups led by Carrillo and Tejedor have demonstrated the power of the hydroxyl-yne reaction in the field of DCvC, using phenols as exchangeable components in alkyl β-phenoxyacrylate systems. 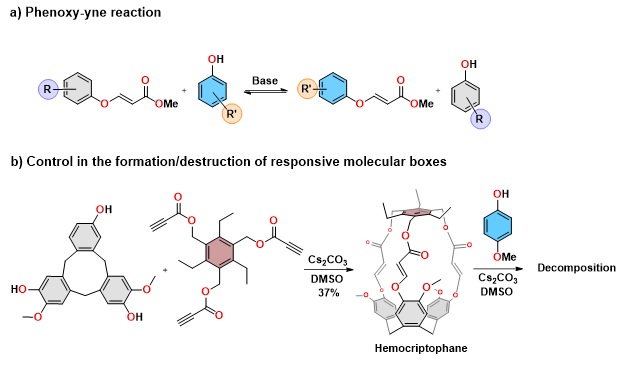 In these systems, the pKa difference between the phenols governs the exchange dynamic and sets the equilibrium thermodynamic. The reaction has been validated in the arena of supramolecular chemistry, in which complex architectures such as responsive molecular boxes occupy a relevant place. As an example, the molecular box hemocryptophan was chosen, which presents good thermodynamic stability and is synthesized in a single step using the hydroxyl-yne reaction shown in the Figure. The box, once formed, decomposes in the presence of an excess of p-methoxyphenol using the same reaction conditions of its formation, which confirms the potential of this chemistry to control the construction/destruction of molecular systems with phenolic components.